Why just share a meal, when you can share everything that goes into making one? Experiencing all the laughter and little moments that happen before food even hits the plate! It's this belief that led us to create Uncorked Kitchen - A place where people from all walks of life are invited to come and share the joy of food in the making.

Eric attended the University of Colorado at Boulder and received his degree in Economics with a minor in Business. After that he worked in trade logistics for a clothing manufacture in Denver before moving to Boston to pursue his love of cooking and attend Culinary School. He attended the Cambridge School for Culinary Arts in Cambridge Ma and completed the professional chefs program.

Eric worked his way through multiple kitchens in the Boston area and helped to open a restaurant in Newton with Susan Regis. He left the restaurant world and ventured into a position with Wolfgang Puck Catering where he was responsible for running the café, assisting with catering and handled all purchasing for the Museum of Science. From there he was promoted to Executive Chef and sent to the Institute of Contemporary Arts to run the café and catering.

After his experience with corporate food service, restaurants and catering Eric found that he enjoyed sharing his knowledge and experiences with people rather than just cooking and serving for them. Before the move back to Colorado Eric was brought on as the Resident Chef for Sur la Table’s new flagship store in downtown Boston. Eric was responsible for all aspects of the cooking school side of the business and created a successful program with a large following. It is here that he refined his teaching skills and solidified his desire to share his knowledge and expertise through interacting with people through the joy of cooking. Once Eric moved back to Colorado his sole focus was on creating Uncorked Kitchen with his wife Katie and learning and becoming involved in the culinary scene in the Denver area. 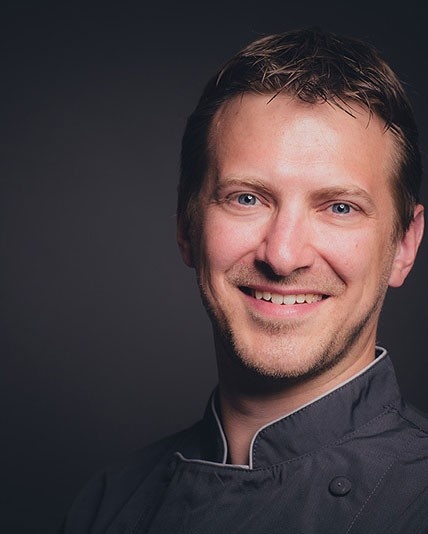 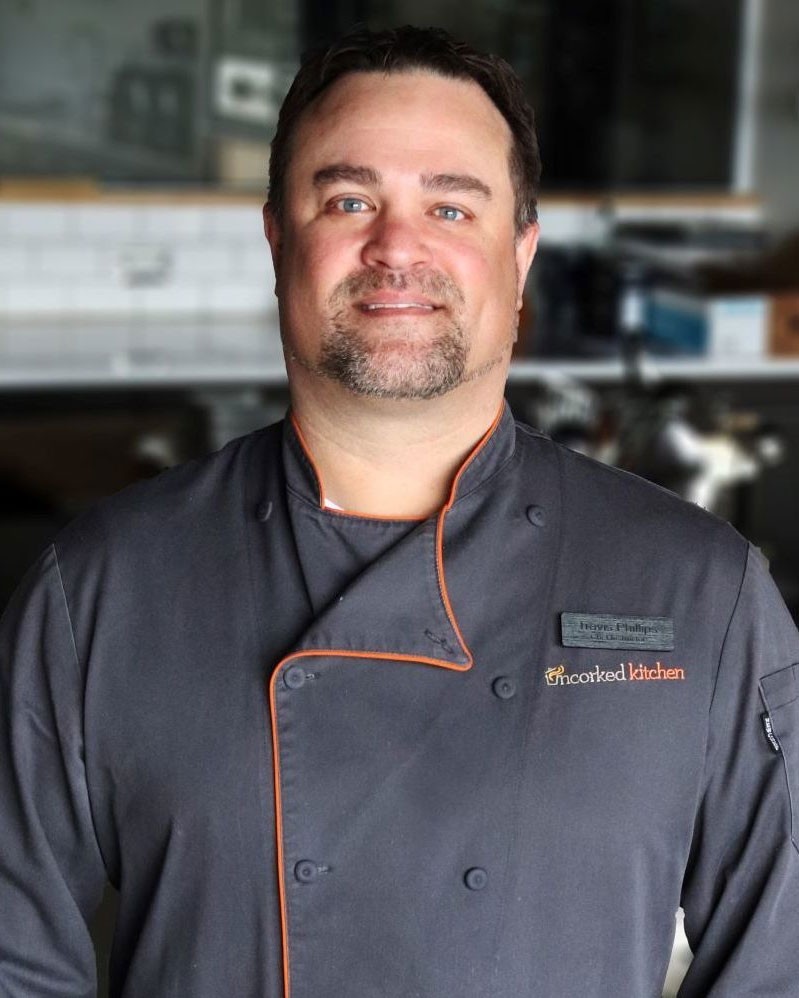 “I visualize each meal like I’m preparing it with my grandma. You never know when you will be able to cook together again, so it better be BADASS!”

Chef Travis found his passion for food from the young age of 6 years old. The first meal he remembers creating was breakfast in bed for his Mom on Mother’s Day when he was 6 years old. The meal consisted of microwaved scrambled eggs, bacon, toast, and a glass of orange juice, but the smile on his Mom’s face when he brought breakfast to her made a lasting impression. He saw the joy that food can bring when sharing it with people that you care about, and he has sought to recreate that same experience for his guests throughout his career.

Chef Travis started cooking professionally at the age of 15, and has worked primarily for independent restaurants for a total of 27 years. Throughout his career he has worked in every position in the front of the house from busser, server, bartender, and also including upper management. His focus when serving guests is to make them feel like they are dining in his own home, and to bring a high level of service with an unpretentious atmosphere. In the kitchen he has worked in every position possible, including working his way up from dishwasher to being the Executive Chef of multiple restaurants.

Travis has a culinary arts degree from the Art institute of Charleston South Carolina and has had a multitude of different culinary experiences before arriving at Uncorked Kitchen. His philosophy when cooking is to always strive for balance in each and every dish; balancing salt, acid, sweet, and heat. Most importantly though, he believes that when you put forth a strong effort combined with technique into making a dish, you can actually taste the effort! This final result is what he hopes to share with our guests at Uncorked Kitchen.

Along his path to Uncorked, Chef Travis has worked with 2 different James Beard Southeast nominated and winning Chefs, and one winning restaurant for best restaurant Southeast in Charleston at FIG. He is from Indianapolis originally, but moved and worked in restaurants in Steamboat and Charleston, before deciding to make Denver his permanent home. In Denver he has worked for such iconic restaurants as the Justin Brunson helmed Old Major, Squeaky Bean, and was also the Executive Chef of Low Country Kitchen and the Pig and Sprout.

Maddie was always in the kitchen as a little girl. Learning from her grandparents and mom in the kitchen she thrived when she got the chance to cook. She went on to cook most holiday meals and dinners as she grew up.

Chef Maddie went to Johnson and Wales University Denver and got her Associates degree in Culinary Arts and her Bachelor’s degree in Food Service Management. She went on to work for Disney World in Florida in the German pavilion in Epcot as a chef for a year. Her travels then took her to Germany and France to learn all about wine. She has traveled to Italy, Spain, and all around the continental US. Her love for cooking really blossomed as she learned from different cultures.

Maddie has always had a passion for kids and teaching. Her love brought her to Uncorked Kitchen as an assistant and she quickly grew to love the art of cooking and teaching together. Maddie has taken over the Kids Program Coordinator position and is loving every bit of it!

She hopes to teach the passion and love for food that she has to the kids. She loves seeing their excitement blossom in class and hopes to inspire them for many years to come. She looks forward to having each and every kid in class. 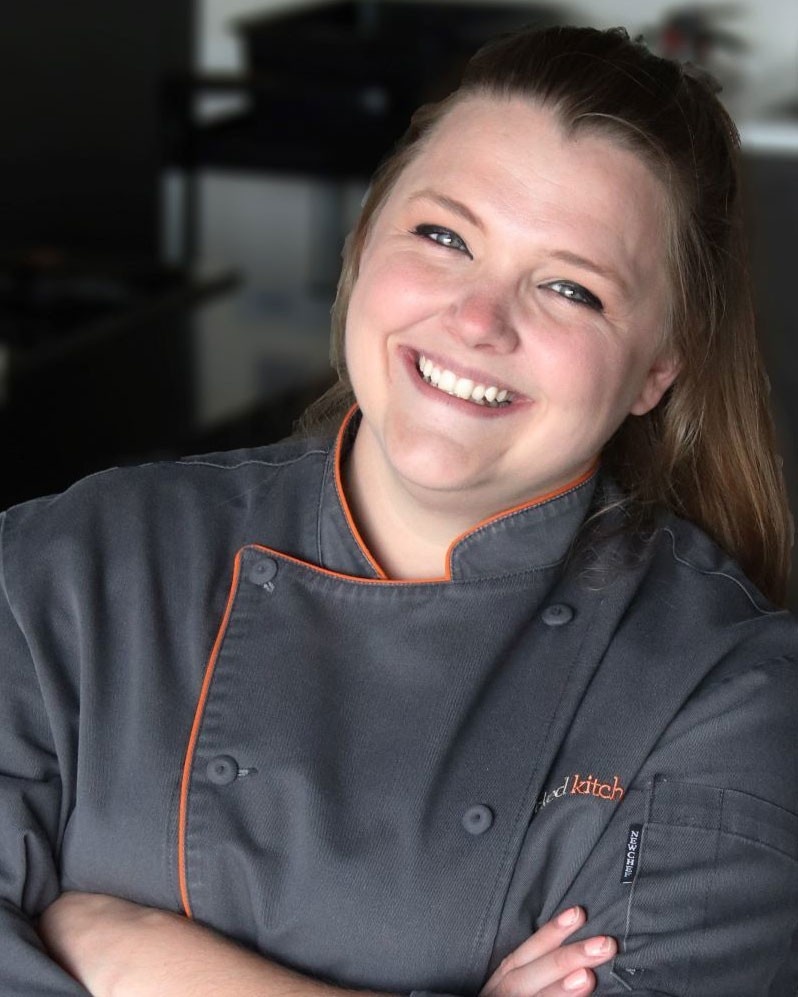 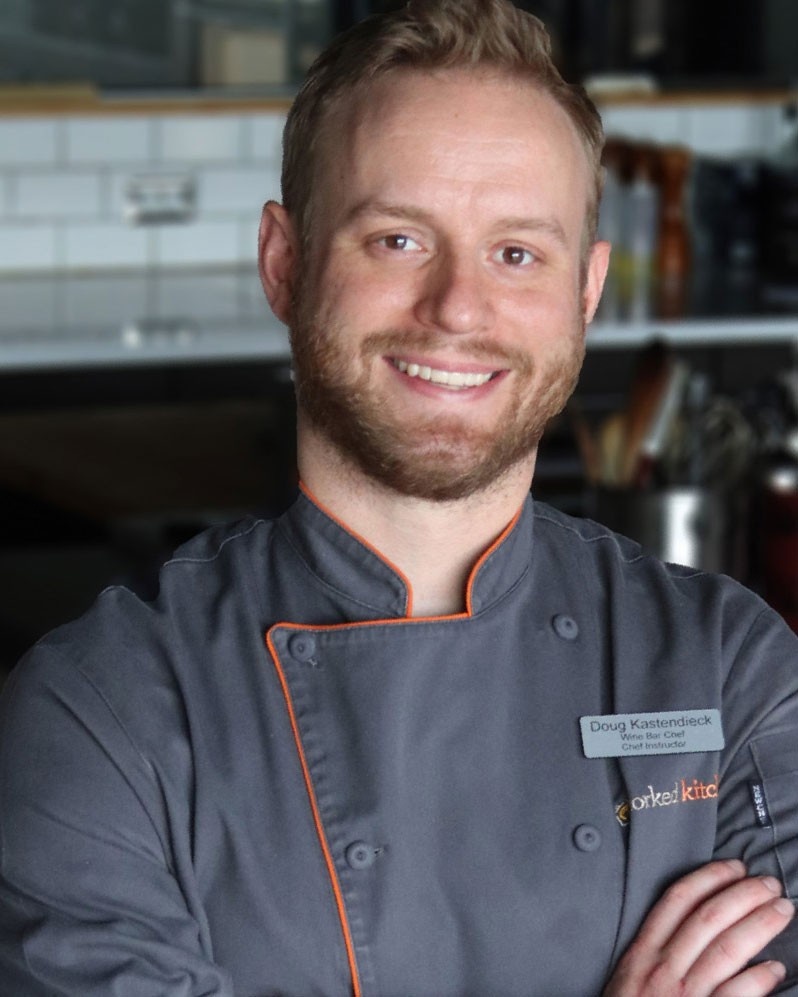 Growing up, food was always a strong part of Doug’s family life. Both of Doug’s grandmothers were excellent cooks, and since one was from Poland and the other from Florida, his influences were broad from the beginning. Always looking to help in the kitchen, he knew food was his passion at a young age, and with busy professional parents he was able to practice this skill preparing dinner for his family.

Doug’s first foray into restaurant life was after college working in the front of the house at the Café Bistro in Nordstrom Cherry Creek. Once he experienced the atmosphere, camaraderie, and pace of working in restaurants, he was hooked. Doug quickly moved to the back of the house where he worked his way up to Lead Line Cook. During this time, Doug attended Johnson & Wales University where he received a Bachelor of Culinary Arts & Food Service Management.

Upon finishing culinary school, Doug became the sous chef at Castle Rock Adventist hospital. Their goal was to redefine the concept of hospital food to make it a pleasurable experience for the patients in both body and mind.

Doug joined Uncorked Kitchen in May of 2018 as the Wine Bar Chef, where he creates menus that change with the season. Doug also brings his passion and enthusiasm for food to the classroom as a Chef Instructor. Always looking to broaden his knowledge of cuisines, Doug loves to make worldly foods; his favorite is Asian foods ranging from Vietnamese to Indian to Singaporean. He loves to share this knowledge and is always happiest when talking about food.

Chef Zoe Hohman grew up in her mother’s coffeeshop in Towson, Maryland and as you can imagine, began drinking coffee at the ripe age of 8 years old. Her mom put that creativity and energy to good use helping her create menu items for the shop and baking goodies for the guests!

She knew that food, and the science behind food, would be her passion as she grew older. She graduated from Johnson and Wales with two Associates degrees, one in Culinary Arts & one in Baking and Pastry, in addition to her Bachelor’s in Science and Culinary Nutrition. She has been working in the food industry for 10 years, and has been the Executive Pastry Chef at Colorado’s own Yaya’s European Bistro among another positions.

She desires to be a Food Technologist for a test kitchen, focusing on recipe development, and in the meantime LOVE teaching others about cooking, creating decadent dishes in coordination with our wine bar team, and bringing a smile to everyone’s faces around her.

Take control of your finances with this free 4-step guide.